Reaction times are a very common outcome measure in psychological science. Frequently, people use the mean to summarise reaction time distributions and compares means across conditions using ANOVAs. For example, in a typical experiment, researchers might record reaction times to familiar and unfamiliar faces, and look for differences in mean reaction time across these two types of stimuli.

A classic article from 1993 by Ratcliff 1 examined how outliers in reaction time distributions impacted statistical power, and how a variety of different methods can be used to mitigate their influence. I’m going to replicate some of his simulations here. 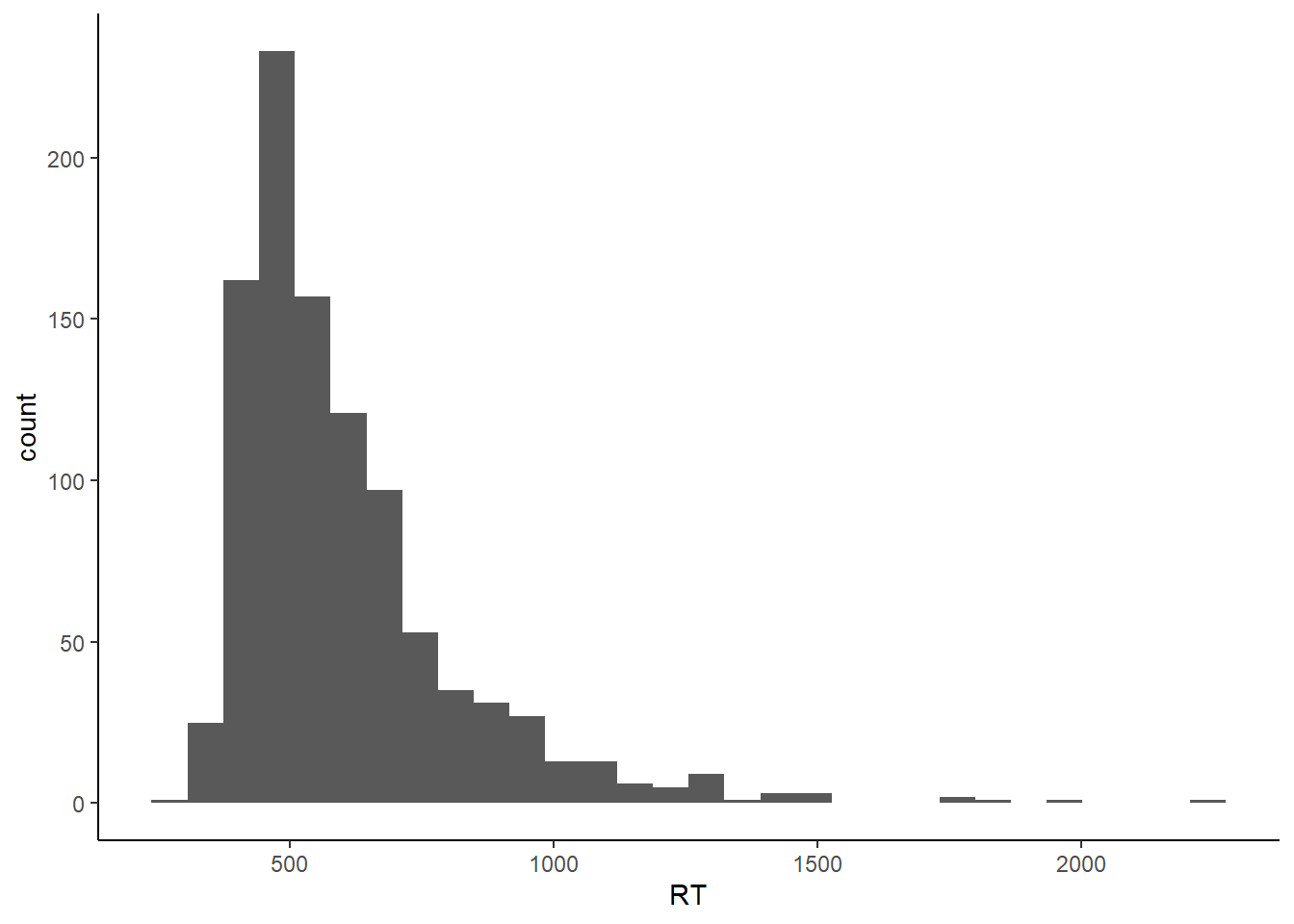 As always, other things come into play during psychology experiments. People get bored or press buttons too quickly. Our distributions become contaminated with outliers. Ratcliff simulated this by replacing values from the sample distribution with values from a second distribution. Note that this is outliers in the sense of datapoints drawn from a distribution other than that related to the process of interest. In fact, such outliers can easily by embedded unnoticed within the distribution generated by the genuine process, and are as such impossible to detect. Thus, in general, it’s only the really short or really long outliers that can be identified as being outliers. 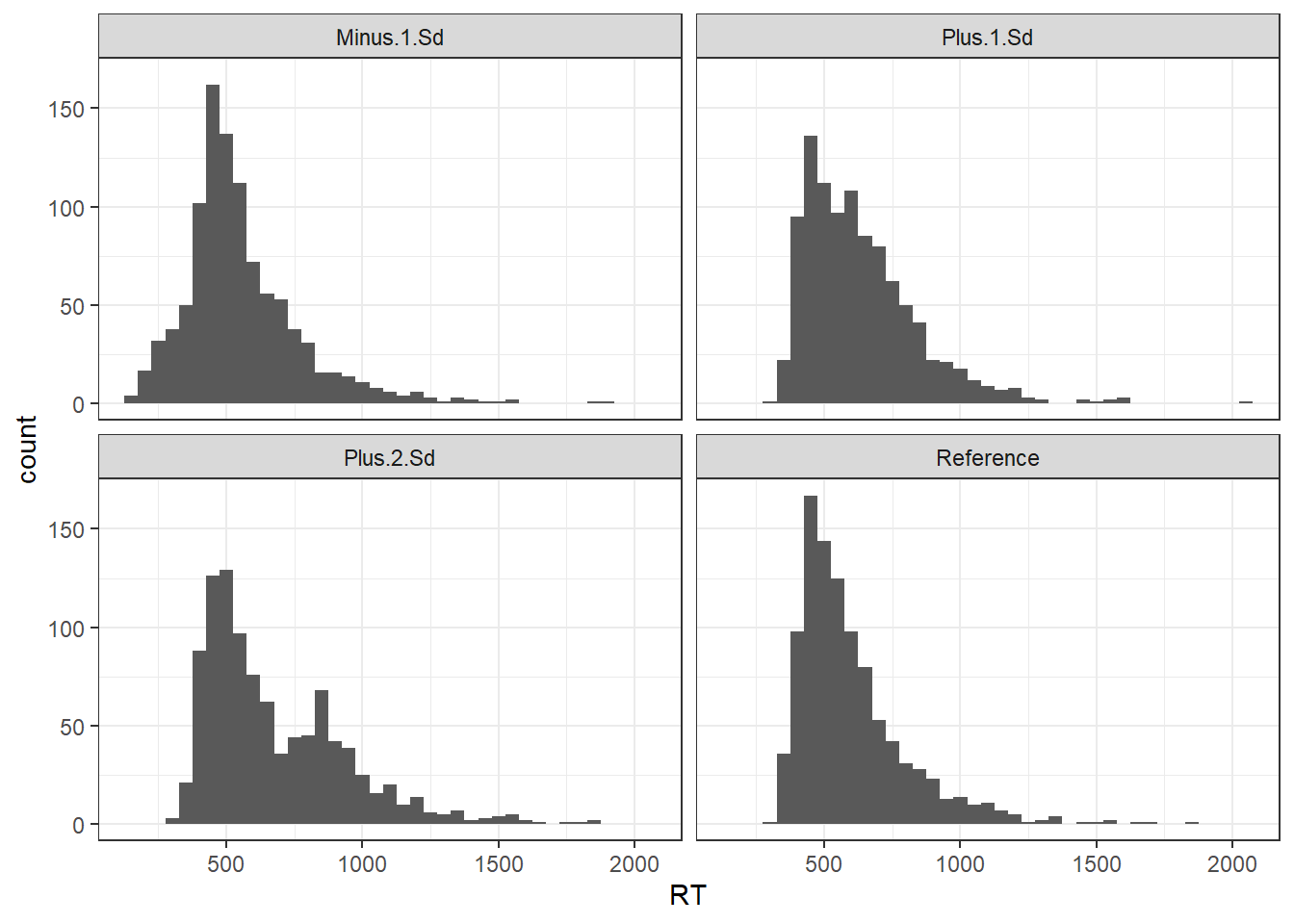 Note how with the “Plus 1 SD” distribution, the outliers are pretty much impossible to tell apart from the genuine process - there’s a more noticeable but still not exceedingly obvious bump in the tail of the “Plus 2 SD” plot, and an early bump in the “Minus 1 SD” plot.

Let’s start by building a helper function to generate data distributions with a specified proportion of outliers. I then create a second function to generate a full set of experimental data as per Ratcliff. This generates data for a 2 X 2 design with within-subjects factors A and B. Ratcliff generated data for 32 subjects, with 7 trials in each condition (more on that later), an ex-Gaussian distribution with parameters mu = 400, sigma = 40, and tau = 200, and a main effect in factor A, so let’s make sure we can vary all those things at will. 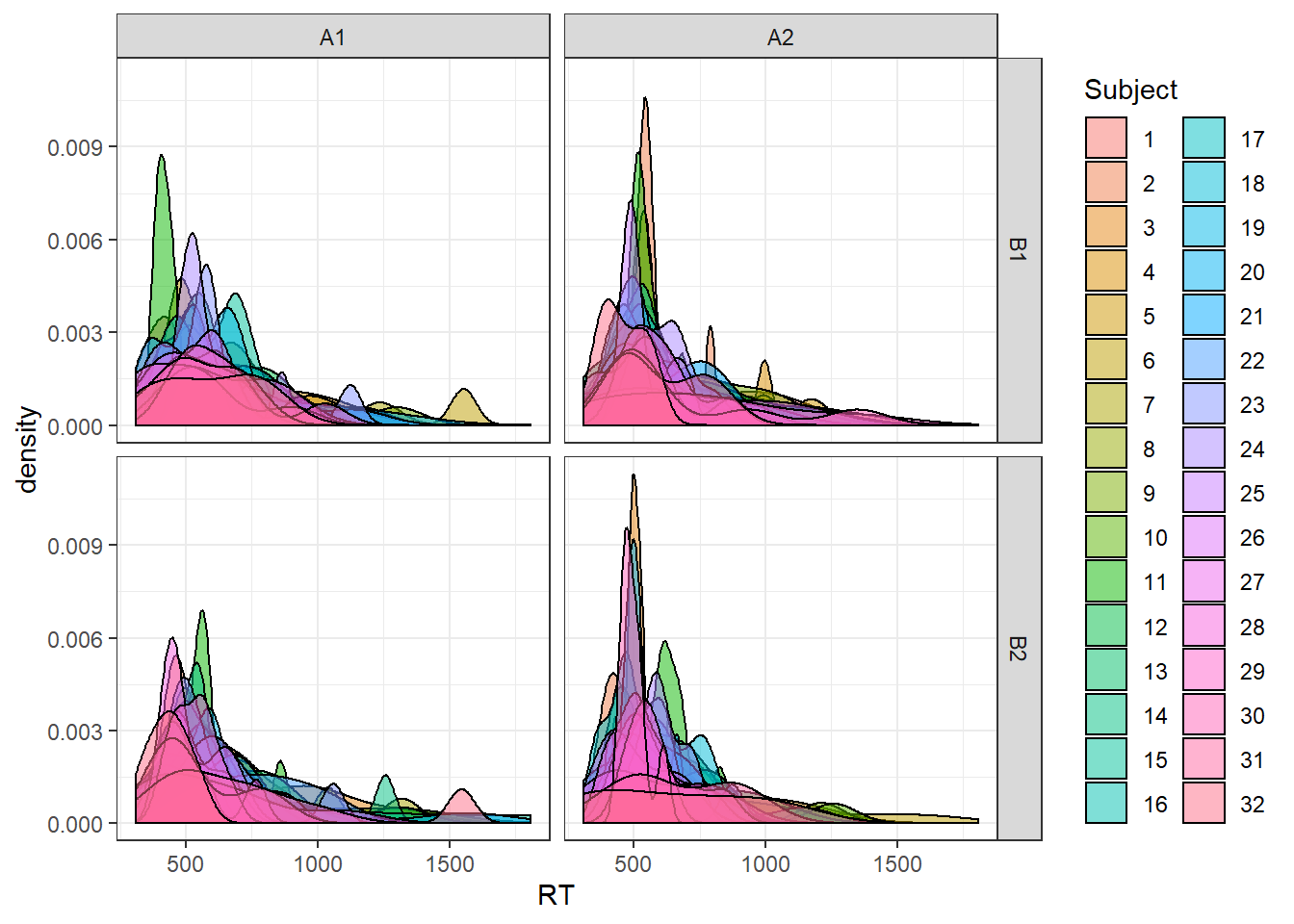 The above plot shows kernel density estimates of the generated distribution for each subject, for each condition.

So now we have a function that can simulate Ratcliff’s simulated datasets. Ratcliff generated 1000 simulated datasets and ran a 2X2X32(!) ANOVA for each one using a variety of methods for dealing with outliers. I’ll go with the normal 2x2 repeated measures ANOVA.

Let’s write yet another function: this one generates a dataset using the ratcliff() function I wrote above, then summarises it using all the cutoffs, transformations and statistics used by Ratcliff. Ratcliff uses:

The function returns a list of the p-values for each ANOVA term for each different type of measure. It’s not enough to run that just once of course - we need to run it over and over again. We’ll replicate Ratcliff’s first set of simulations. He simulated data from 32 subjects, from a 2 X 2 factorial design, with 7 trials per condition. The ex-Gaussian was generated with the normal part having a mean of 400 ms and standard deviation of 40 ms, and the exponential part having a tau of 200 ms. Ratcliff added a main effect of 30 ms, so that both the interaction and other main effect were null, and ran the simulations 1000 times. To show the effect of outliers, he also ran the simulations twice: once with 10% outliers, and once with no outliers.

The stimulation results match up nicely with Ratcliff’s. We can see clearly that all methods have worse power in the presence of 10% outliers. The effect of outliers decreases as the cutoffs become more extreme, with very restrictive cutoffs of anything over 1s having very similar power. The inverse transform (1/RT) has the highest power overall, even performing well with outliers. Both the mean, the 2.5s cutoff mean, and the trimmed mean (maximum RT deleted) suffer the most from outliers, with drops in power of some 30-40%.

Any effect on Type 1 error for the other, null main effect?

For all measures, the results are close to the nominal alpha of .05 - I’ve marked the region from .025 to .075 with a grey rectangle. The interaction term comes out much the same. So in other words, most of the procedures increase power without increasing the rate of false positives.

A couple of things I always wondered about with these simulations: Normally data that comes from within subjects is correlated, and there’s no attempt to manipulate that here, and the number of trials per condition is very low at 7, which seems like it may exacerbate the influence of outliers in general. The size of the main effect should probably follow a normal distribution rather than being a flat 30ms for everyone. And the between-subject variability in general might be better represented by a normal distribution too. I wouldn’t expect all of these to influence the main conclusions, but I’ll have a look at that at a later date.