I previously replicated some simulations from a journal article by Ratcliff (1993) 1. These sims demonstrate that transformations such as taking inverse RTs typically improve power to detect RT differences across conditions. The problem is that the mean alone is a poor estimate of the central tendency of the underlying RT distribution, particularly in the presence of outliers - see the previous post for details.

I’ve started seeing people refer to skewed RT distributions in articles quite frequently, often as justification for performing some non-parametric test or other on reaction time differences. However, more often than not, this seems to be driven by a misunderstanding. The reasoning I typically see is along the following lines: 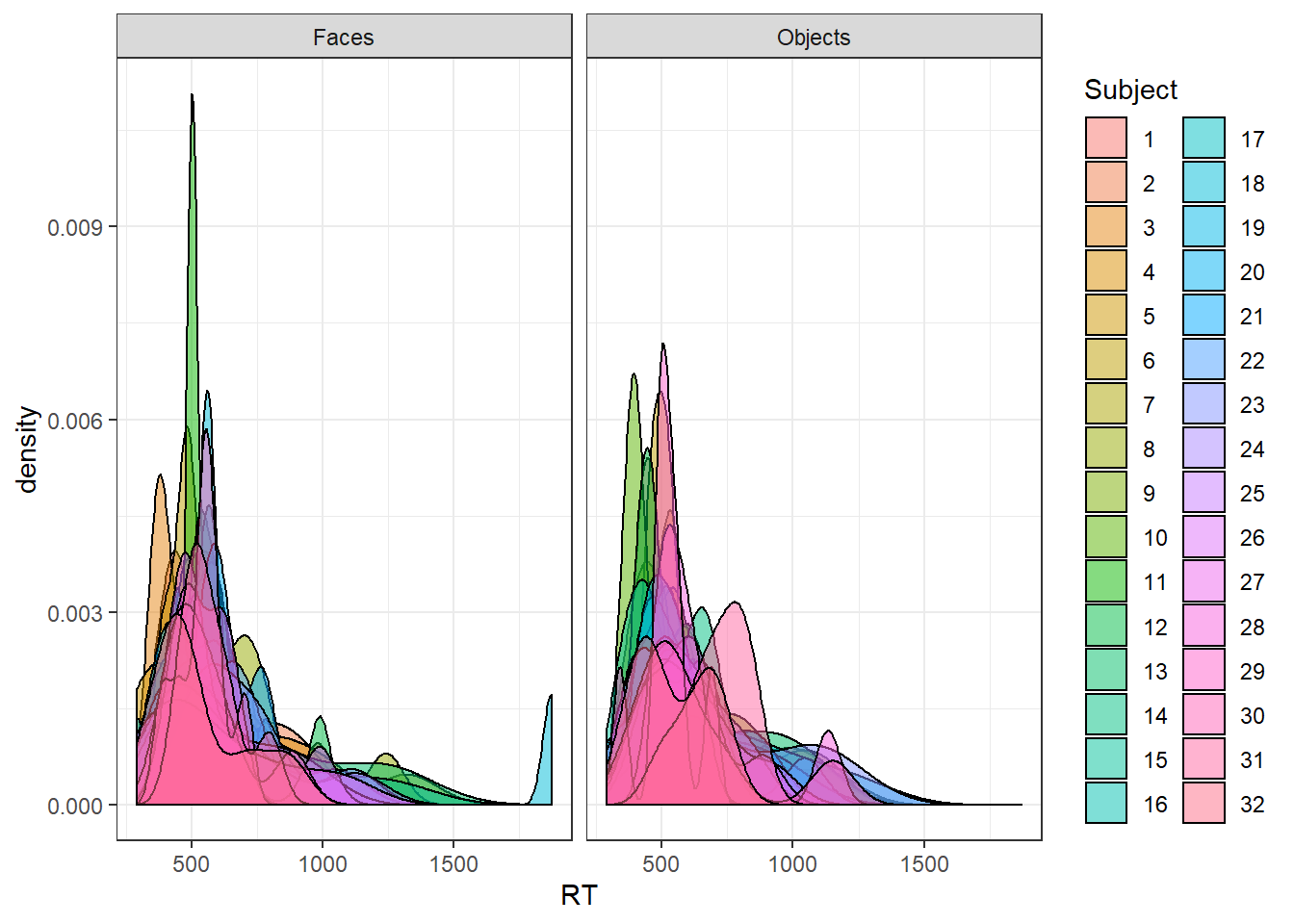 For this post, I’ll cut down the different summary statistics to four - the mean, the median, the mean of the inverse transformed RT, and the mean of log RT.

As expected, the inverse transformation comes out on top, with the mean lagging way behind. But clearly switching to the non-parametric Wilcoxon signed-rank test achieves little but a slight loss of statistical power.

“WHAT ABOUT WHEN THERE ARE OUTLIERS?!?” I hear you cry! So let’s run the simulations again, but this time with 10% of the RTs replaced with outliers.

Here, as before, power mostly drops, but worst of all for the mean. It’s clear that using Wilcoxon signed-rank tests here also achieves little. There’s a minor increase in power using WSR for tests of the median, but it’s quite a bit smaller than the shift from using the mean to using the median, and a lot smaller than the shift to using the inverse transformation. The presence of outliers in the RT distribution does not seem to matter much in terms of which test should be used, since the outliers are in the RT distribution, not in the distribution of mean RTs.

And how about when there’s no effect?

Type-I error rate is bumbling around at .05, just as we’d expect.

So why doesn’t using a non-parametric test make a difference?

The second is in part due to some of the underlying parameters of the simulations. Here we are comparing paired distributions within subjects. So it is not even the distribution of mean RTs that is key; it is the distribution of the differences between means. And that will also tend to be approximately normal. Note that even if the distribution of means were skewed, if the means from both conditions are both skewed in the same direction by the same amount, chances are the skew will cancel out in the differences. So, on the other hand, it’s possible that if the skew across conditions is mismatched, the differences will be skewed, and then perhaps the non-parametric test will win out. Some of these possibilities may be addressed with future simulations.

Think about how you’re summarising the data!

The message here is, if you’re concerned about the skew of RT distributions and the presence of outliers in those distributions, use a transformation before summarising the data, or use some other estimator than the mean to summarise the distribution. Don’t switch to a non-parametric test for the sake of it, or perform the transformation on the mean RTs, as that doesn’t necessarily achieve anything! I’m not saying never do non-parametric tests, or stick with doing paired t-test comparisons of the means etc.; the loss of power observed here from using non-parametric tests is minimal (and there was even a very small increase when testing differences based on median RTs), and they may well perform better when the t-test assumptions are violated. But do not swap one poor rule of thumb for another; think about why you are switching to non-parametric tests and whether they are actually necessary.

Note that there are a bunch of other reasons not to use the mean, and to use other approaches to analysing reaction time differences - see a series of posts by Guillaume Rousselet, which I recommend investigating.