In my last post, I gave a brief introduction to intertrial coherence, which is a measure of how consistent oscillatory phase is across an ensemble of trials.

One thing I mentioned, right at the end, was that ITC is a compound, summary statistic that doesn’t in and of itself exist on a single-trial level. This has lead several people to think about how to link it to single trial behavioural measures such as reaction time. There have been several articles using a technique called jackknifing to generate estimates of each trial’s contribution to the overall ITC.

As in the last post, here we’ll take a look at ITC at electrode A29 (Biosemi’s Oz), a central occipital electrode. Here’s an image showing power and ITC at A29. 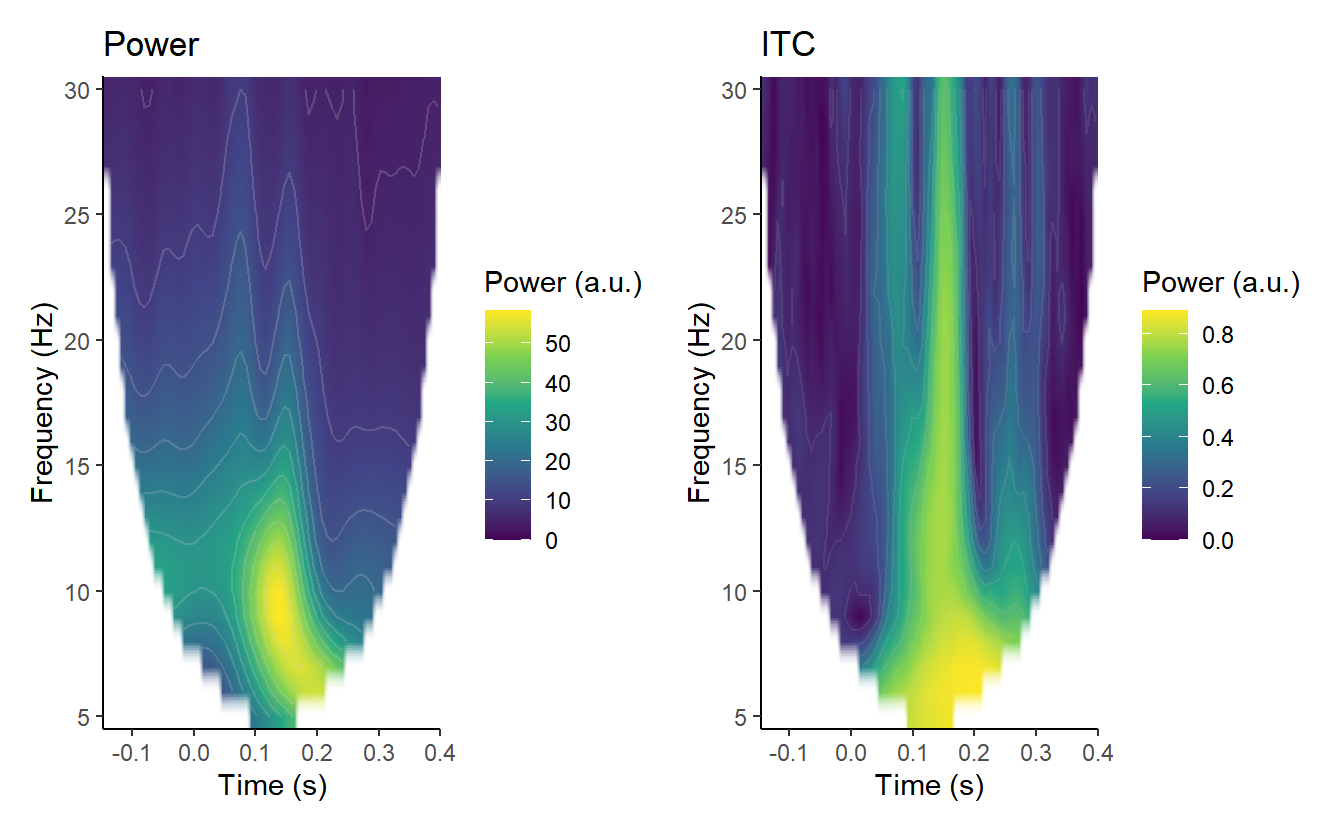 Jackknifing is a method of estimating the bias and standard error of a parameter estimate (e.g. the mean of a set of observations) by recomputing the estimate from subsamples of the full sample. 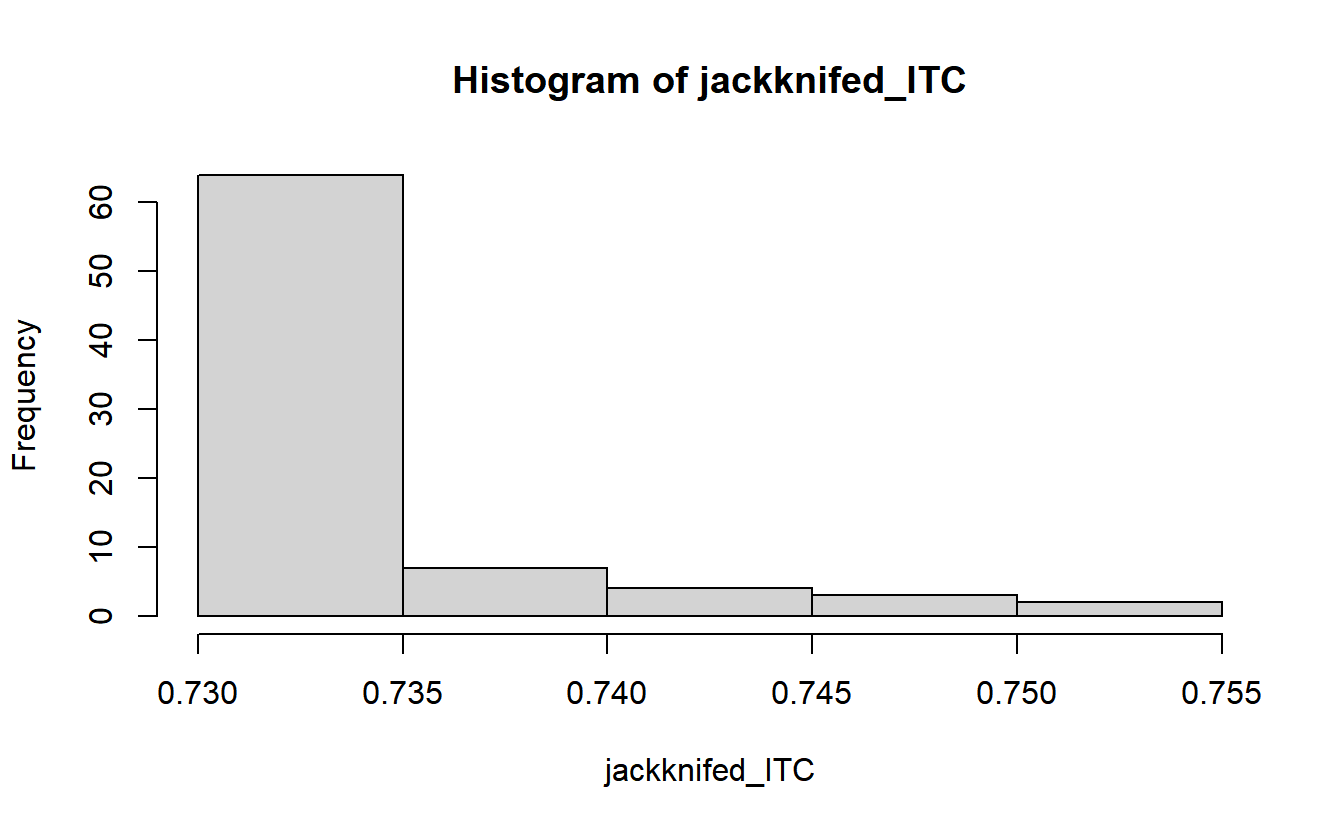 You need to use a little caution interpreting these values. Remember that these are the values that ITC would have had without one specific trial. Our all-trials ITC was .73, so when removing a single trial doesn’t really change ITC from that, it tells us that trial was quite similar to the rest. But when removing a trial really changes the ITC, that specific trial was quite different from the rest.

These can also be converted to jackknife pseudovalues. 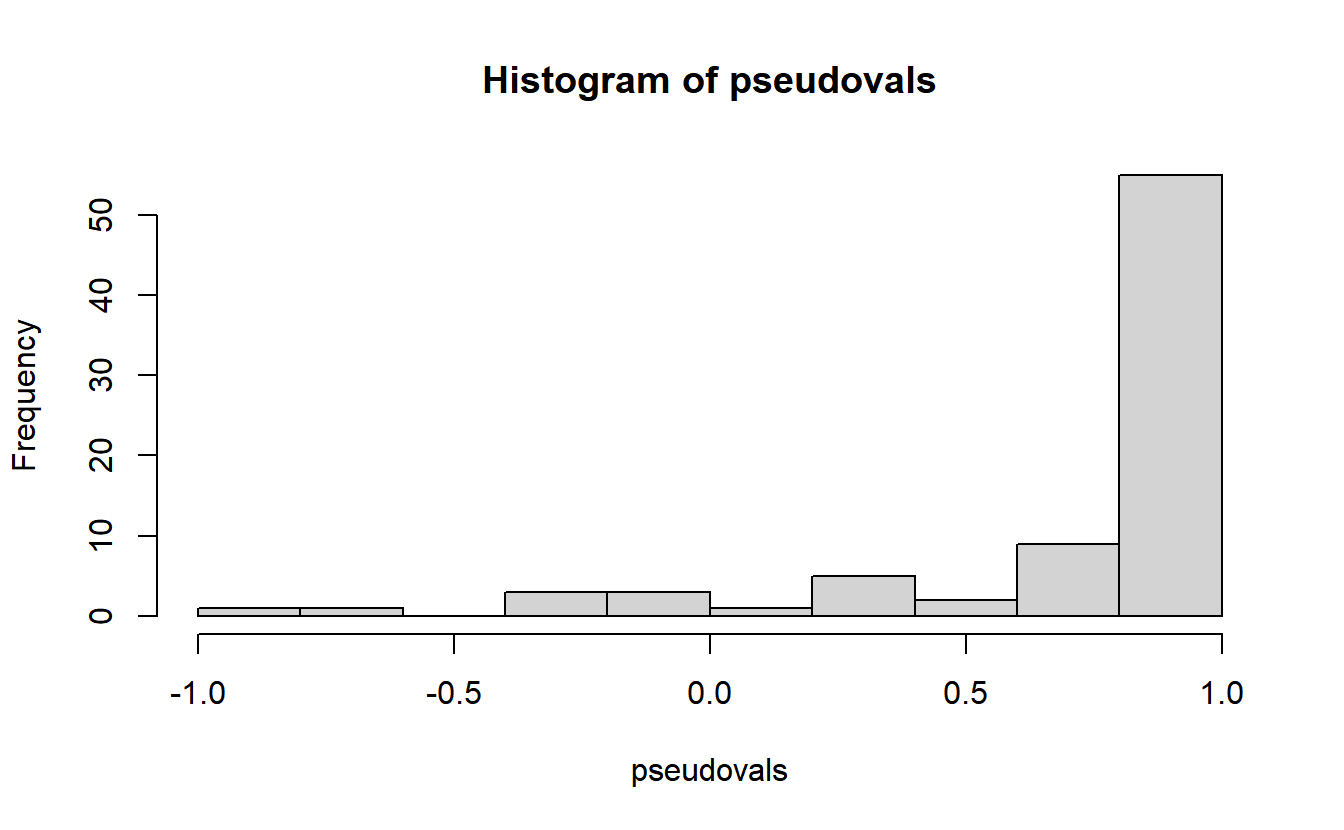 So what does single-trial ITC actually mean?

The thing is, a question I had when I saw jackknifed ITC was - what does that actually mean? There are some jackknife-able variables that I think make theoretic sense. For example, sometimes a jacknife is used to calculate single trial sensitivity (d’). One can readily imagine that the underlying property, perceptual sensitivity, can exist on a single trial.

But ITC, by definition, has to be a property of multiple trials - it’s a measure of coherence across trials. How can we thus

Let’s take a step back. What exactly is ITC?

ITC is a measure of phase consistency/concentration. Let’s convert our Fourier coefficients to phase angles, using a polar plot that shows the position of each of the phase angles on the unit circle, and let’s calculate the mean phase. 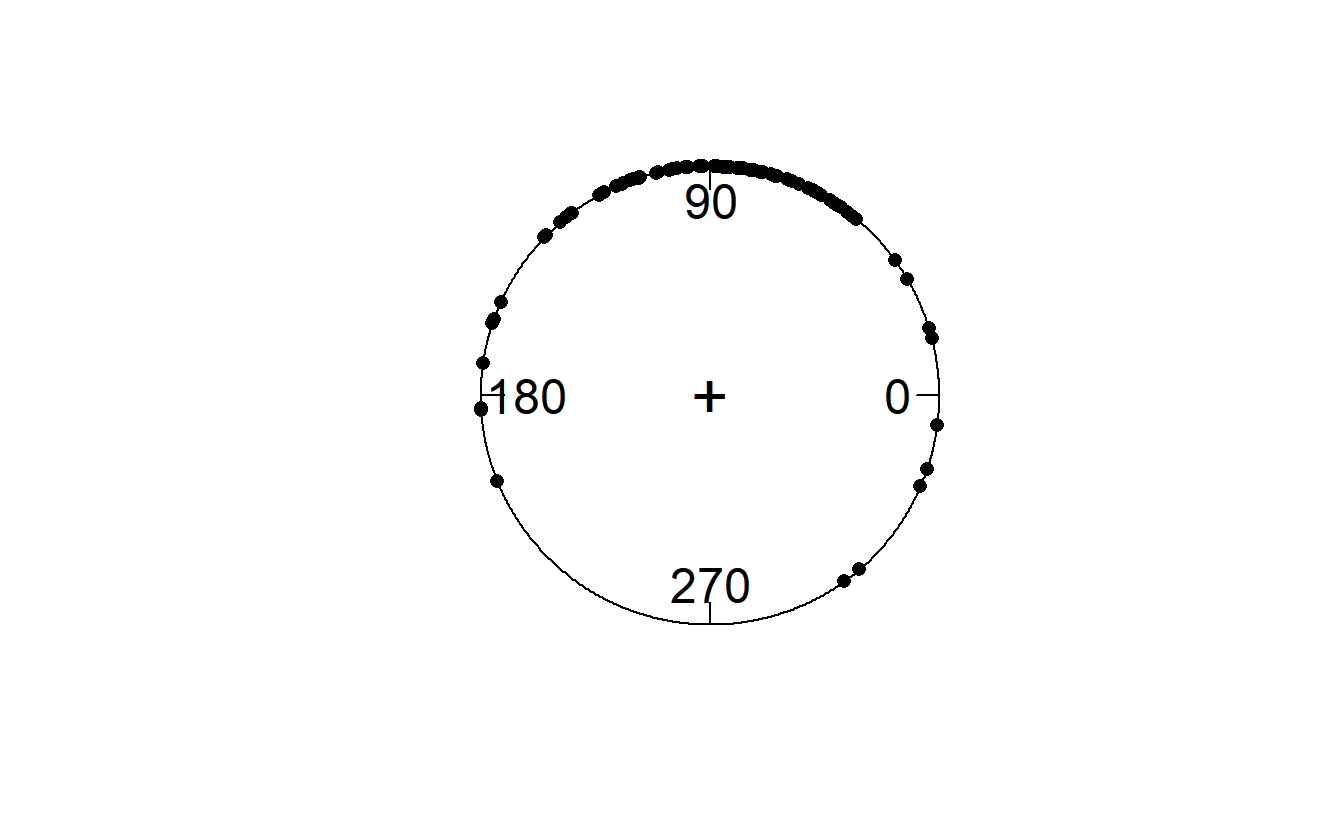 This gives us a notion of the mean direction of phase (in this case, expressed in radians, rather than degrees).

So the mean resultant length/ITC is a measure of dispersion around the circular mean of the phase angles. And while ITC is not defined on a single-trial basis, phase is.

Suppose, then, that we were to relate single-trial phase to jackknifed pseudovalues or jackknife replicates; what pattern would we see? 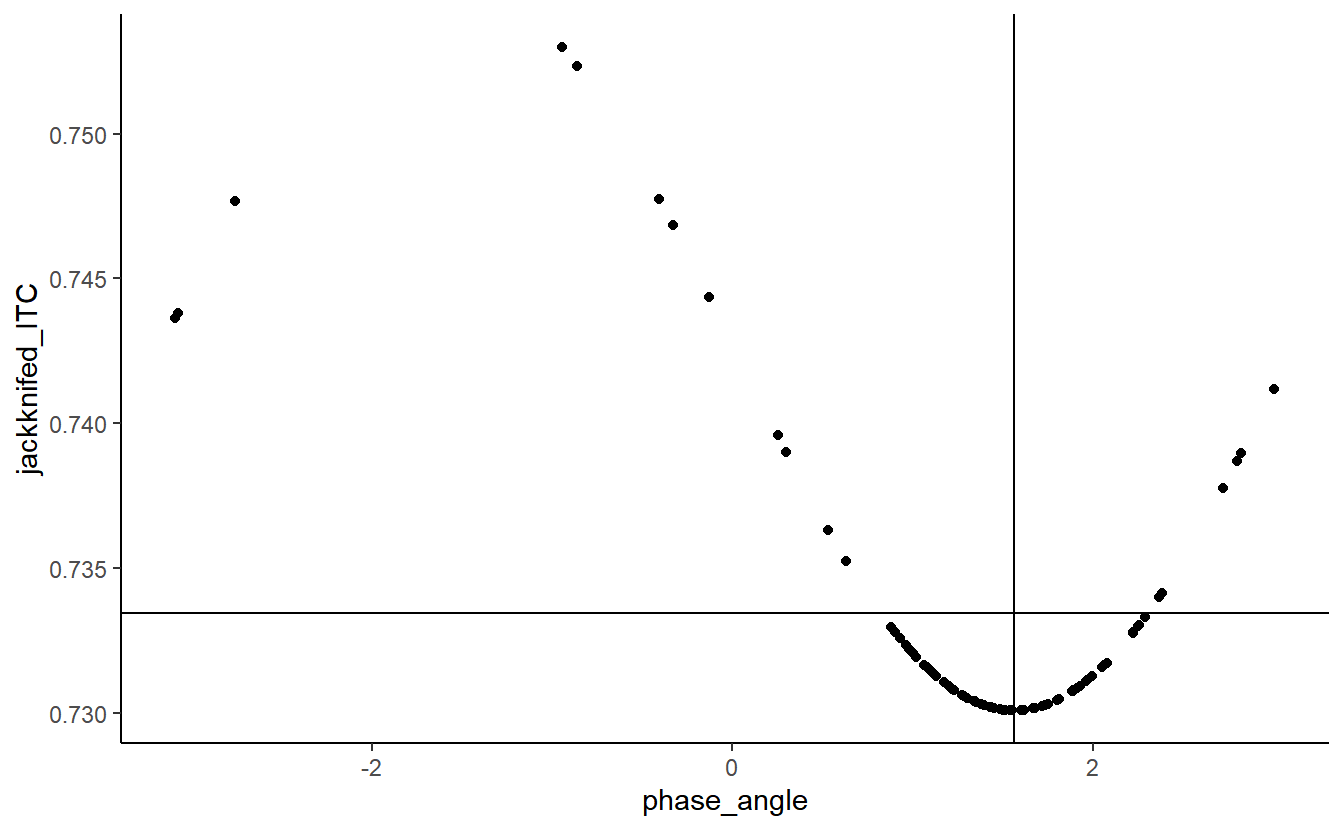 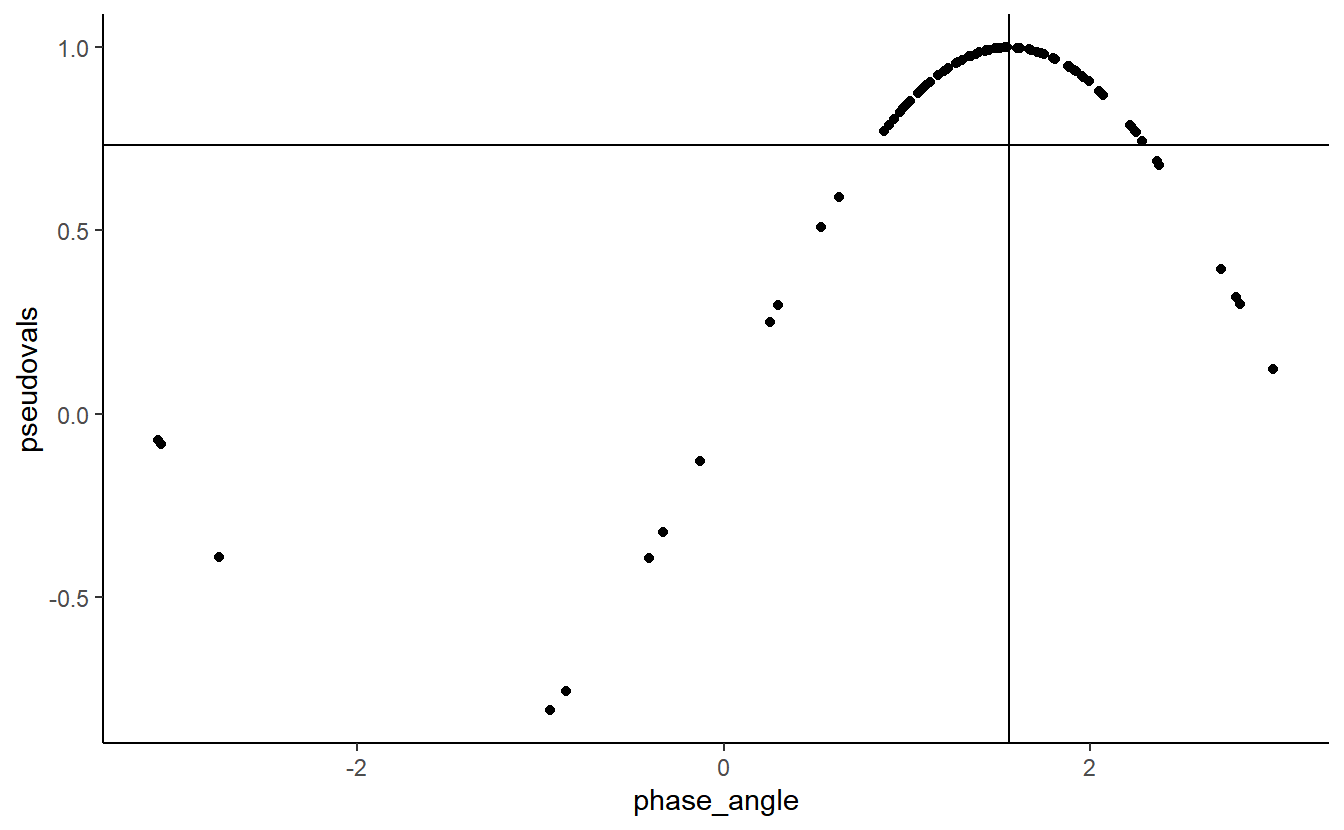 The relationship between the two is clearly sinusoidal.

We can enter a circular predictor into a linear model using its sine and cosine: 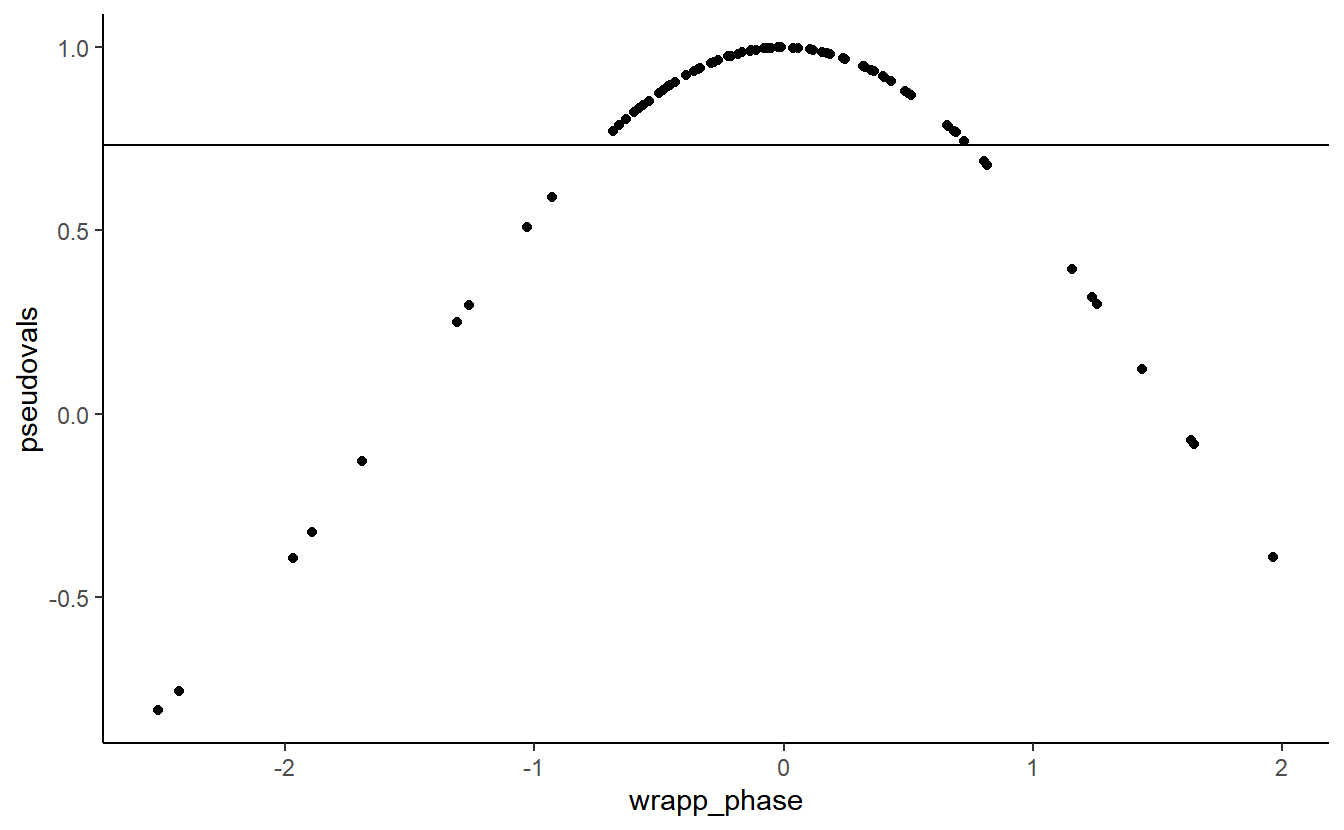 Jackknifed ITC is a transformation of a trial’s absolute difference from mean phase. The further away a trial’s phase is from the mean phase, the greater the jackknife ITC.

[^1] Note that a caveat is that one should use jackknife estimates of both parameters, even the ones that do exist on the single trial level. i.e. you calculate the jackknife estimate of both ITC and mean RT when a given trial is left out.